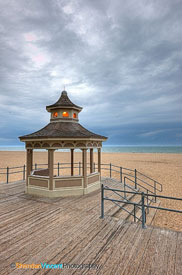 On numerous occasions when I get the urge to get the camera fired up I have taken a stroll along the beach at “Ontario Beach Park”, which we often call “Charlotte Beach”. Last summer with an early rise I took this photograph of one of the gazebos built into the boardwalk along the beach. Catching the light at a point where the light of the gazebo was still on and bright orange against the cloud  gray of early morning I thought that “Morning Light” was the fitting title. I liked the play and balance of the ambient and artificial light. Check out the relaxing moments in the early morning of Rochester’s beach especially in the summer and fall. I have a panorama taken about the same time of the entire boardwalk that I am working up and plan to show as a photo premier. “Morning Light” is featured in the current exhibit at Image City Photography Gallery – “Through the Student Lens 2011″. It is printed on canvas.

This entry was posted in New Image, Review and tagged Beach, Rochester. Bookmark the permalink.