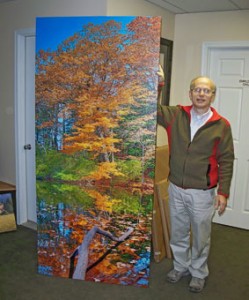 At Image City Photography Gallery we have opened out Holiday Show 2011. For the exhibit, Gallery Partners have taken over the featured walls in the Gallery and we have nine invited Guest Photographers as well as our Artists-in-Residence Jim Patton and David Perlman. For a featured photograph in my exhibit, I have produced a 36×80-inch vertical panorama of a photograph that I took this past Fall at Lake Eastman, Durand Eastman Park. It is printed on Epson Exhibition Canvas Satin. While I have made a few vertical panoramas, this is the first one that I have done in large size. I am getting positive reaction to the natural appearance of the print from the image that covered a range from very bright sun on yellow leaves to the dark shadow in the trees and tree fall.  Additionally, I have several other photographs in the exhibit, including Summer Solstice 2008, Warm Lights, Cool City and Chimney Bluffs. A 20×40 canvas print of Yellow Leaf Road was sold. We enjoy the Holiday Show and have held one now for seven years at Image City. The photo at left shows me with the photograph at the frame shop before installing it at Image City, noting its size relative to a “standard Sheridan”. The exhibit runs through December 23. The Gallery is also open on Mondays and Tuesdays during the Holiday Show in addition to the 11-7 times on Wed – Sat and noon-4pm on Sundays.